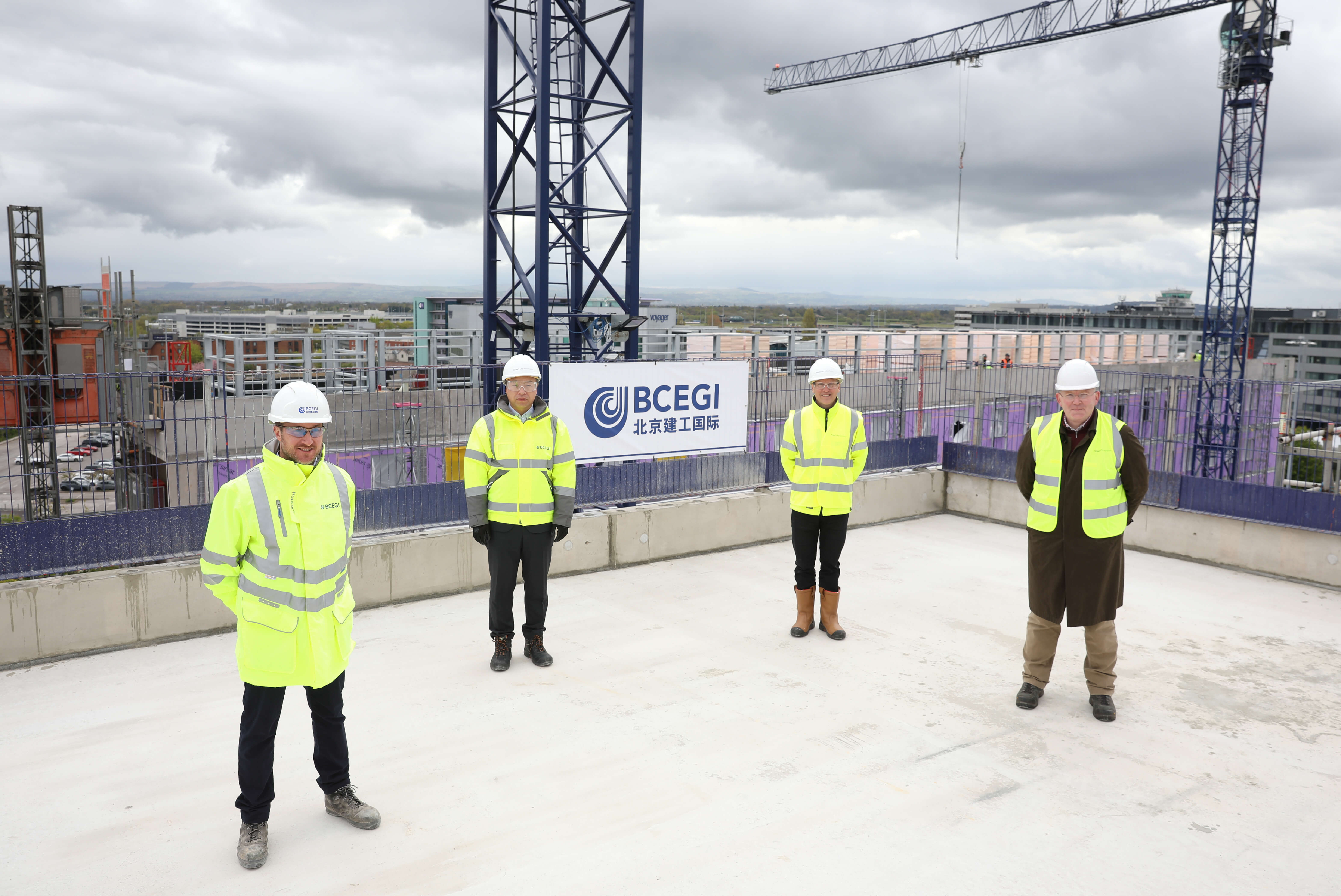 Airport City Manchester has reached another construction milestone as it tops out on the development's new Ibis Budget and Holiday Inn. Scheduled to open in early 2022, these two major hotel developments will deliver 542 new hotel beds and create in the region of 350 jobs.

Forming part of Airport City Manchester’s £250 million hotel district, work to build the 280-bed Holiday Inn and a 262-bed Ibis Budget has been undertaken by Beijing Construction Engineering Group International (BCEGI), which was appointed as the main contractor on the £45 million project. Construction of the hotels began in January 2020 and despite the challenges presented by the pandemic, BCEGI has been able to continue work safely with little impact on delivery.

Dongwen Yu, Lead Director, BCEGI, said, “As main contractor and joint venture partner, we are delighted to see these two new hotels at Airport City Manchester top out. The team has done an exceptional job in maintaining construction on site, as well as ensuring those involved have been able to work safely within government guidelines. Alongside the recent opening of the brand-new pedestrian and cycle bridge, these latest additions are another great indication of the progress being made at Airport City Manchester."

The developments are all located next to Manchester Airport and are at the heart of Airport City Manchester. Adjacent to the multimodal ground transport interchange, the hotels will become part of a wider Hotel District featuring a cluster of nine new properties and providing more than 2,400 new hotel rooms.

This district will also include a nine-storey, 412-bedroom hotel and restaurant, for which planning consent was granted in 2020. The hotel and restaurant will be operated under the TRIBE brand, which is part of the Accor Group and whose other brands include Mercure, Sofitel and Novotel,

On behalf of Airport City Manchester, Gareth Jackson, Group Property Managing Director at Manchester Airports Group (MAG), said, "Topping out on the Holiday Inn and Ibis hotels is another major milestone at Airport City Manchester. Both of these globally recognised brands represent the first in a series of hotels that will make up our £250 million Hotel District, which is set to provide a range of additional facilities and amenities to the airport campus, such as meeting space and a new food and drink offer, as well as providing employment opportunities for local people.”

The new Holiday Inn Manchester Airport will feature the brand’s signature Open Lobby, which combines the front desk, lobby, restaurant, bar, lounge and business centre into one versatile area. It will also feature a new full-service restaurant located on the ground floor, which has been designed to attract guests from both hotels. Room types including standard, twin, family, executive and accessible will be offered across six floors, while the southern corner of the sixth floor has been tailored to create a terrace for guests, overlooking the airfield. Meanwhile, the seventh floor will feature a canopied terrace and crew lounge which will look north over Airport City Manchester towards the city centre.

These latest additions to Airport City Manchester mark the latest stage of progress at £1 billion development and follow the recent opening of the brand-new £6 million pedestrian and cycle bridge over the M56 motorway spur road.

One of UK’s most exciting business destinations in development today, it will see the creation of circa 15,000 jobs – with work on the site already underway, including most recently the completion of a new £15 million link road and further infrastructure development, including the new £6 million foot and cycle bridge linking the development site with the airport’s rail, bus and Metrolink interchange.