A significant milestone at Airport City Manchester was reached on Saturday evening as its landmark pedestrian and cycle bridge was installed over the M56 spur airport approach road. 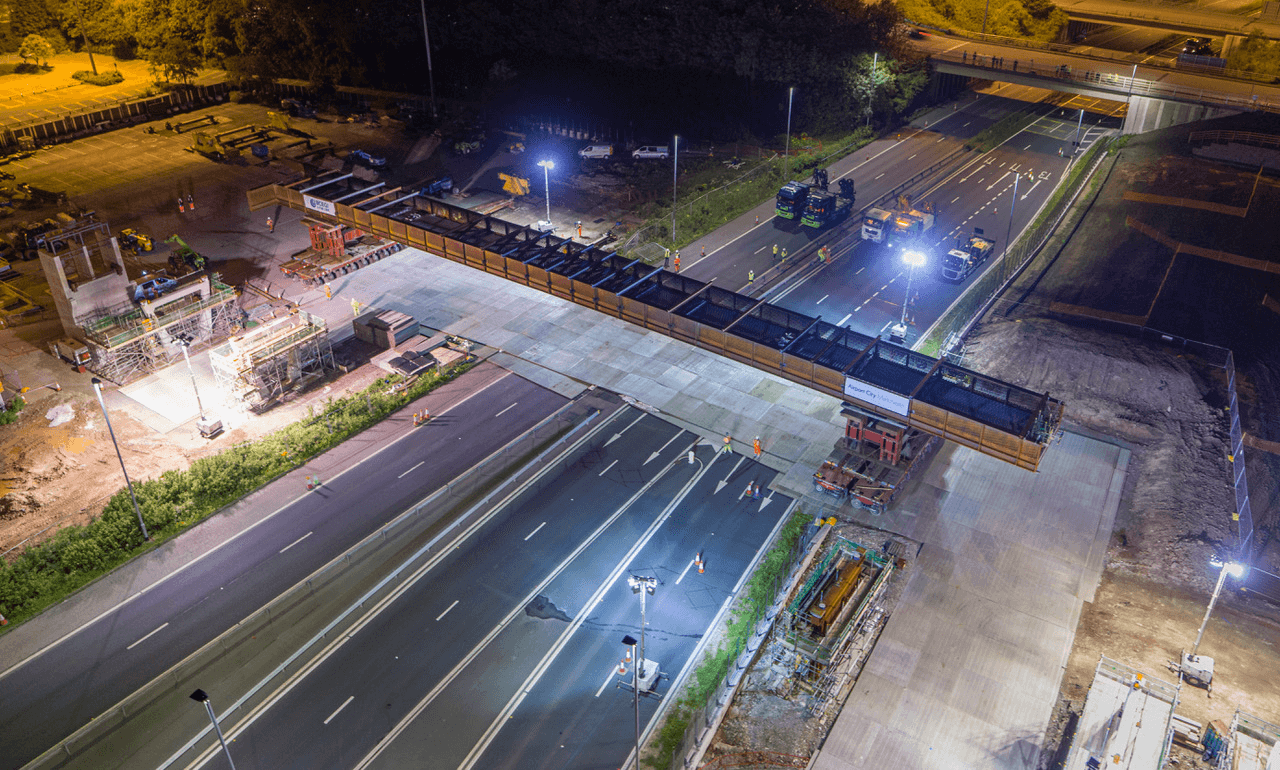 A significant milestone at Airport City Manchester was reached on Saturday evening as its landmark pedestrian and cycle bridge was installed over the M56 spur airport approach road.

The brand-new 81m long section of the bridge, weighing over 470 tons, was rolled into position overnight by a specialised team of eight people, using two, 120 tonne, 40 axle self-propelled modular transporters. This latest piece of vital infrastructure was fabricated by County Durham-based Cleveland Bridge UK, which, working closely with main contractor BCEGI, was also responsible for undertaking the complex 12-hour installation.

Designed by Manchester architects 5Plus and structurally designed by RoC Consulting, the 95m long and 6m wide bridge is a striking addition to the landscape at Airport City Manchester. Featuring more than 21,000 perforations across its length, it has been constructed from Cor-Ten steel which develops a rust-like aesthetic after several years' exposure to weather and eliminates the need for painting.

The £6m pedestrian and cycle bridge has been part-funded by Manchester City Council, whose 50% contribution to the project helps deliver a sustainable connection from the Airport City Manchester site directly to rail, bus and tram links, as well as providing direct access to pedestrians and cyclists travelling to and from Wythenshawe and surrounding areas.

There are around 25,000 people working on the Manchester Airport site. It also has its Airport Academy training centre within its Ground Transport Interchange, which provides employment and training for local unemployed people. Earlier in the year, a state-of-the-art AeroZone interactive classroom opened, which will be used by all schools in Woodhouse Park and the wider Wythenshawe area.

The bridge will also serve as a vital link across the 73-acre site of main development land at Airport City Manchester, which has the capacity to deliver a diverse range of over 15,000 jobs across a number of sectors.

Already, the first phase of The Hut Group’s £1bn THQ business campus is underway and upon completion this 1m sq ft global headquarters site will support up to 10,000 jobs. Work on Airport City Manchester’s new £180 million hotel district is also gathering pace, where three new hotels and 1,500 new beds will be delivered by 2022.

The wider site also has the capacity to accommodate further development, including two 92,000 sq ft Grade A office buildings and a multi-story staff car park, planning consent for which has been granted.

The brand new bridge at Airport City Manchester is set to open to the public in November this year and when fully complete will blend into the neighbouring buildings with extensive landscaping and public realm, as well as providing feature ramps and passenger lifts to ensure it is accessible to all.

Jonathan Haigh, Managing Director of MAG Property and Airport City Manchester Development Management Leader, said: “The new bridge is a key component of the Airport City Manchester masterplan and capitalises on the exceptional connectivity to multiple modes of public transport at the Manchester Airport Ground Transport Interchange. In turn this will underpin increased usage of public transport to more sustainably facilitate occupier needs and enhance convenience for employees, visitors and neighbouring residents alike.

“It’s a striking addition to the local landscape, with the architecture reflecting our ambition to create a real sense of place and signal a high quality of environment. The bridge connects the emerging hotel district south of the M56 spur road to the larger swathe of development-ready land to the north, which is earmarked primarily for office and ancillary uses. It also enables car parking to be decanted away from the heart of the scheme helping to enrich the amenity value of public open spaces.

“Together with significant additional investment in enabling infrastructure and the live construction activity underway to deliver our first two hotels and the THG HQ campus, we continue our pursuit of the many lasting positive benefits of the scheme.”

Mike Kane MP for Wythenshawe and Sale East, said: “I am delighted to see this finally open at Airport City Manchester. A dedicated pedestrian and cycle bridge gives safe and convenient access to many types of public transport arriving to and departing from the airport’s hub and crossing our region. I am a determined to improve active travel for all and am delighted Airport City Manchester is providing the opportunity of new jobs and new connectivity for both businesses and residents alike.”

Sir Richard Leese, Leader of Manchester City Council, said: "This bridge is a landmark in the development of Airport City Manchester, which will link Wythenshawe people with the jobs and opportunities being created there. It's a symbol of that connection as well as another boost to walking and cycling facilities in this city."

Chris Droogan, Managing Director of Cleveland Bridge UK, said: “We are very proud to be part of such an important stage of the development of Airport City Manchester, which is such a significant location for the North of England.  The unique design of the bridge, with its extensive collection of perforations, required the extensive experience of our skilled engineers and fabricators who have transformed the architect’s vision into a structure that can be enjoyed by visitors and local people.”